On 28th May 2005 a round table “Feminism and Feminisms” organized by BAUW as part of the events to mark the 80th anniversary of the organization and its joining of the IFUW was held at Sofia University “St. Kliment Ohridski”. Milena Kirova, Krassimira Daskalova, Ralitsa Muharska, Kornelia Slavova, Irina Genova, Reneta Roshkeva, Luibinka Stoilova, Georgeta Nazarska, Maya Nyagolova, Madeleine Danova were part of the participants in the discussion. MA students from the Gender Studies Program as well as historians and journalists also took part in the debate. 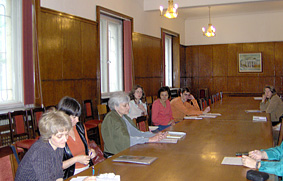 In August 2005 BAUW Chairwoman Krassimira Daskalova was elected President of the International Federation for Research in Women’s History.