The Twentieth International Conference of the International Federation for Research in Women’s History entitled “Women, Gender and the Cultural Production of Knowledge” was held in Sofia from 8th August till 12th August 2007. The main organizer of the conference was the Bulgarian Association of University Women together with Sofia University “St. Kliment Ohridski”. The conference was under the auspice of the First Lady of Bulgaria, Dr. Zorka Parvanova, and was financially supported by Sofia Municipality (Culture and Education Directorate), Bulgarian Office of the UN Program for Development (UNDP), Trust for Civil Society in Central and Eastern Europe, East-East Program of Open Society Foundation and the American Association for Women in Slavic Studies.
The conference was attended by more than 165 scholars from 45 countries, working in the field of women’s history and gender studies. During the three days of the conference various papers and presentations were delivered in 38 sections united around several major topics: “Women, Orality, Memory”, “Women in Traditional Societies”, “Writing of Gendered History”, “Cultural Aspects of Women Representations”, “Women’s Movements and Feminisms”, “Cultural Production: Women Writers”, “Women in Professions”, “Masculinities and Femininities through Time and Space”, “Gender in Books, Art and Music”, “Museum and Performativity of History”, “Women in the Arts”. Several documentaries were shown as part of the plenary sessions – about Marie Balian, an Armenian ceramic artist from Jerusalem, about Irma Lindheim, a kibbutz founder in Israel and about the Bulgarian feminist Jenny Bozhilova-Pateva.
A special launching of the Bulgarian translation of Scott McFie’s book Among the Bulgarian Gypsies with an Introduction by Prof. Timothy Ashplant published by the Sofia University Press “St. Kliment Ohridski” was also one of the focal points of the conference.
An important part of the conference was the round table “Gender Equality in Secondary and Higher/University Education in Central and Eastern Europe”, which gathered together 40 participants (18 from abroad and 22 from Bulgaria) – scholars, representatives of women’s organizations in the academia and NGOs working for gender equality. Data for the women’s place in higher education and science in Bulgaria, Romania, Turkey, Albania, Serbia, Greece, Slovenia, Croatia, Hungary, Russia, Latvia, as well as for the whole region of Central and Eastern and South-Eastern Europe were discussed in several of the panels. Especially useful were the meetings of the members of BAUW with members of similar organizations from the Balkans. 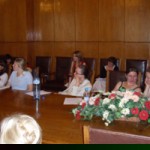