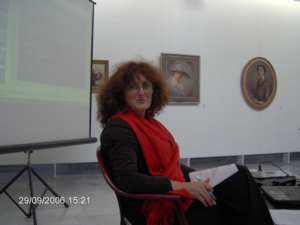 On 11th November 2006, an open lecture was delivered by the Chairwoman of BAUW, Assoc. Prof. Krassimira Daskalova, on “Women’s Movements and Feminisms in Central, Eastern and South-Eastern Europe” in the hall of the Sofia City Gallery where the art exhibition “Presences/Absences” was shown. The lecture was followed by the launching of A Biographical Dictionary of Women’s Movements and Feminisms. Central, Eastern, and Southeastern Europe: 19th – 20th Centuries, edited by De Haan, Fr., Kr. Daskalova, A.Loutfi (Budapest, New York: CEU Press, 2006) with articles by other BAUW members. 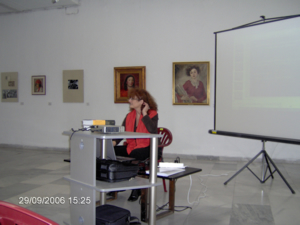 In her lecture Prof. Daskalova made a brief survey of the emergence and the growth of women’s history as a field of scholarly research and an academic subject and traced chronologically the development of this field in Bulgaria (in the works of Stanka Nikolitsa, Vana Kepova, Ekaterina Zlatoustova).
The second focus of the lecture was on the development of feminism and its typology. In the lecturer’s understanding there are different types of feminisms which co-exist polyphonically in Central, Eastern and Southeastern Europe. That was the driving idea behind the compiling of the Biographical Dictionary which gathers together different life-stories, which could form a new understanding of the region’s feminisms and women’s movements and serve as the basis for the writing of their history. 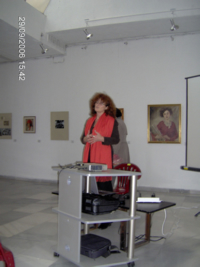 The lecturer explained what the criteria for defining the geographical boundaries of the region had been and for the choice of the women represented in the edition. In her understanding, as a result of the gathered texts, some very important similarities in the treatment of women in Central, Eastern and Southeastern Europe have emerged – the long-kept male dominance and hierarchical power on the material and power level, the devaluation of motherhood, the transference to women of all moral (but not legal and financial) responsibility for family life, the continuation of home violence, the preservation of the high rate of female illiteracy and death rate, the exploitation of women by several modernity projects (socialist, nationalist, fascist), the framing of feminism within national and social discourses.